The VIENNA VIKINGS are the champions of the EUROPEAN LEAGUE of FOOTBALL 2022Impressive success of the new franchise from Vienna!

Impressive success of the new franchise from Vienna

"When VIKINGS President Karl Wurm called me in August 2021 and asked me for my assessment of the new European League of Football (ELF), I would never have thought such a development possible - I guess only sport writes such stories!" Read here a summary of an incredible journey of the managing director of MK Consulting ltd. Markus Kraetschmer. 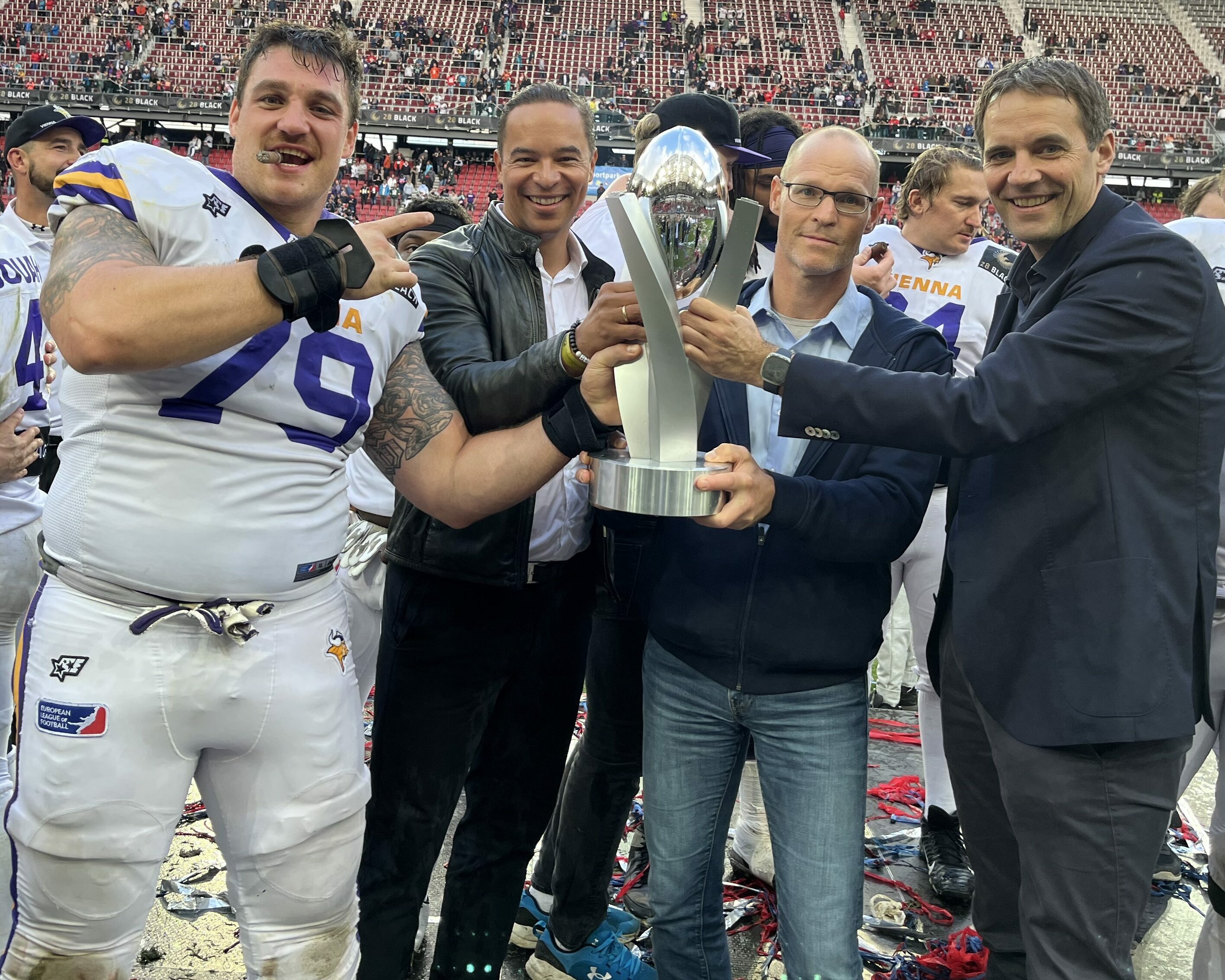 Klagenfurt on Sunday, Sept 25th 2022, 5:34 pm - a dream has come true, the new franchise of the Vienna Vikings wins the title in the ELF in your first year, a success that no one could have imagined a year ago. Players, coaches, staff and officials stormed onto the pitch of the Klagenfurt stadium and celebrated a great success - the team from Austria, from the capital Vienna, won this European league, the highest and best competition in the now also in Europe unstoppable rising sport American Football in the first year of its existence against the previous year's finalist and the best team of the regular season, the Hamburg Seadevils, with 27:15!

In such moments of triumph, I still have to consciously reflect and first thank all those who made this victory possible. Of course, even everyone thinks first of the players, led by QB Jackson Erdman, who have grown together into an incredible unit in recent months and have once again impressively confirmed the old sports adage that the whole is greater than the sum of its parts. But without the extremely meticulous coaching team led by the so experienced Head Coach Chris Calaycay, this triumph would never have been possible. Especially in such moments I would like to remind you of the team behind the team, starting with the kit manager, the physiotherapists and doctors, the matchday helpers, the team management etc. without whom the sporting managers would never have been able to focus so much on their job - on behalf of all of them I would like to mention PR manager Kiki Klepsch and GM Lukas Leitner, who tirelessly and almost around the clock made many things possible, solved and eliminated problems!

But especially in the still so young history of the Vienna Vikings franchise, the presidium of the club under the decades-long successful leadership of President Karl Wurm must not be forgotten. Without his fundamental decision to found a new company (the Football AFC Betriebs GmbH; an absolute prerequisite for admission to the ELF), to split the club into professional and amateur divisions, this success story would not have been possible. And last but not least, I would like to personally thank the other co-owners Robin Lumsden and Constantin Burkheiser, without their personal and financial commitment the realization of this project would not have been impossible!

Also many facts and figures underline this special triumph of the Vienna Vikings into their premiere season in the European League of Football started. With a 10-2 record in the basic round, 6-0 wins in the home games, they could already bring the Central Conference title to Vienna, as well as secure the home right in the semifinals, where the Vikings celebrated a dominant victory over the Barcelona Dragons in front of a sold-out crowd. To then realize the final triumph of this season yesterday in Klagenfurt with the victory in the Championship Game 2022 against the Hamburg Seadevils.

After the outstanding success in the premiere season 2021 of the European League of Football, the football flew across Europe's stadiums again in the summer of 2022. Twelve teams from five nations competed in the league's second year. Vienna had to prevail in the direct duels in the Conference against Frankfurt, Stuttgart and Innsbruck to become group winner. The other opponents were the franchise teams from Barcelona, Istanbul and Wroclaw. And the ELF continues to grow, in 2023 6 more franchises from 5 other nations will be added, so that the league then already comprises 18 teams from 10 countries. The basic concept of the ELF, with a clear expansion and growth strategy up to 24 teams in 2025, the cooperation with the NFL, acquisition of new TV and marketing partners, salary cap, etc. is consistently implemented by the ELF leadership around Commissioner Patrick Esume! The NFL also has a clear growth strategy in and for Europe, the fan base is also growing rapidly in Austria, which makes the sport and competitions like the ELF extremely interesting, the focus is clearly on the target group of 14-34 year olds and families. The facts & figures are really very clear: after only six rounds, the previous year's mark of 100,000 spectators in the stadiums was broken, and the games of the ELF teams achieved record market shares on channels such as Pro7 Maxx and Puls 4 (or Puls 24). In addition, the league reaches more than half a billion households worldwide with its TV and distribution partners as well as its own platform.

Personally, I am very happy and grateful to have accepted Karl Wurm's offer of cooperation in August last year. At the Vienna Vikings, my initial focus was on helping to develop a good structure that would maintain and promote the non-profit club, which has done such important development work in football and cheerleading in recent years, while at the same time providing the basis for professional development - the capital company was quickly established, and investors were and are being sought for this purpose. As a next step, it is important to me that the Vikings attract further sponsorship money and increase the number of spectators at the games in the ELF. And with the experiences of this season, we will also seek talks with the city of Vienna to clarify important issues regarding infrastructure development (esp. stadium and match and TR venue) in the short and medium term - because these framework conditions must also be clarified if such titles and successes are to be possible for Vienna and Austria in the future!

The structural and sporting-economic problems are identical in almost all sports. Nevertheless, I am convinced that with a good medium- and long-term strategy in combination with a good and sustainable structure, a lot can be moved and developed - that is why I have participated in this future-oriented project from the very beginning, to also show how much I believe in it - I have even increased my share recently. And now we will continue on this path together!

Gregory LaBlanc, University professor at the University of California at Berkeley with numerous lectures at Stanford, among others, as a huge NFL fan guest of Co-Owner Robin Lumsden in Klagenfurt yesterday evening, summed it up perfectly: "There is nothing greater and more beautiful in sports than winning a title with a team!"